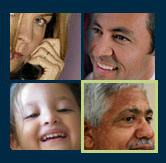 Carlos Gonzales spent his professional life as an accomplished underwater videographer and traveled all over the world on assignment. Now retired and living in La Paz, Mexico, he donates much of his time to a non-profit group dedicated to protecting the many endangered species of the Sea of Cortez. Carlos is also the godfather of Linda’s and Javier’s daughter, Mariana.